skip to main | skip to sidebar

Jordan - a poem about a river

Here is an old poem:

Sorted through the locks

and are moved by the eddies

to an upstream altitude

and the tobacco leafed trees

swaying underneath a group

and the waterline embeds

only dipping with new loads.

Previously published in The Literary Journal, 1998


and in the book Shedding Layers of Ocean.

Posted by Rob Jackson at 5:39 AM No comments:

Another one, 'Psycho-monetary' is going to published in the November issue of the Houston Literary Review:

RLJ
Posted by Rob Jackson at 8:22 AM No comments:

I draw the ghosts from the earth
and the brittle bricks still holding
lodged projectiles from distant cannon.
Their swords become solid only at night,
when the cemetery gates are closed.
Only when the light no longer reflects
have they frozen and revealed geometric perfection.
Only water that has frozen
can bear any shape.
Although I had opened the iron latch
their metaphysical beauty
caused eyes to evolve to a fertile green
and brought my flesh to flatten
against the hard ground
of a gaped wood floor,
assembled by buried bones and dust,
yet aethereally more complete
than the modern tile filled with polymer sealant.
I am swimming in the aether
without armor, and without a shield
but with no gap
between what is untouchable
in the broad daylight.

a little ole' one

a while ago,
my pages would fill
without time
for creases
or wear to appear,
but my mind
has become less prolific
and now
the creases on the pages
match the wrinkles
in the mirror.

My family visited the Angel Oak near Charleston, SC this past week and this poem was a product.

Family Tree
(at the Angel Oak)

A stable trunk grows like the ground,
expanding its roots
through new soil and territories,
but still unable to provide
a solid foundation for every limb
and every leaf.
So the branches grow;
some high into the air,
toward the perfect light of the sun,
only to crack and fall
and decay
from a winter weight
or a summer swirl of a tornado
or a steady hurricane force.
Other appendages return to the earth
to stabilize
and provide anchor
for the heady ones.

I've been meaning to post this for a long while...

The dark thick earth
supports the stalks
of living things,
but sometimes they fall
and scrape the bark
or pull with them
the roots of close neighbors.
Horizontal they begin to decay,
but only slowly with time
and it takes longer
then the lives of the others
to be completely consumed
and returned
to the source.
The larger ones
hollow out and leave a useful shell,
and those in a rich mud
fossilize forever. 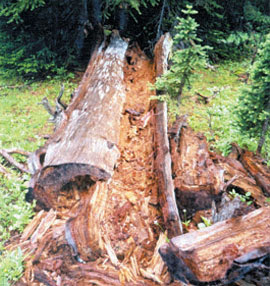 From http://grandpacliff.com/Trees/Img-Trees/rotten-log.jpg
Posted by Rob Jackson at 8:55 AM 12 comments:

Sorry it has taken so long for me to add more to the list:

21. "Kids" by MGMT: Newer Band and song...I feel for the poor kid in the video being tormented